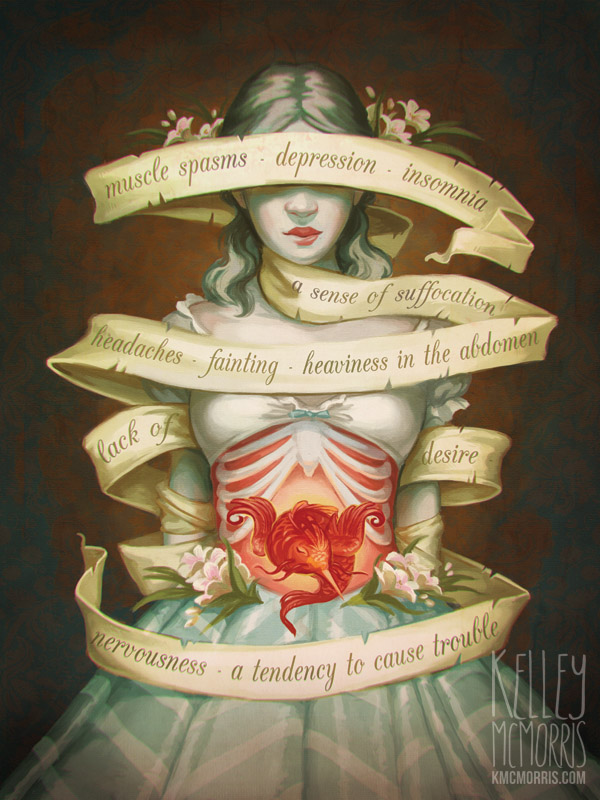 Buckle up, blog readers, this is a weird one.

I was invited to be a part of a group show with Light Grey Art Lab. The theme of the show is GUTS. (Open until May 15th in Minneapolis!)


Part exploration, part education, part evisceration -- we want to know what's really underneath the surface. So dust off your field guides, scalpels, and stay-at-home taxidermist's manuals, and join us for an exhibition that peels back the skin of all of the subjects you've ever wanted to know more about.

For a while I've been a big fan of the podcast Sawbones, which examines medical history in a funny and entertaining way. After listening to their episode about hysteria, I thought it would make a perfect subject for the GUTS show.

Hysteria was a medical condition that was believed to be caused by the woman's uterus moving around inside her body. The belief goes back as least as far as ancient Egypt. Ancient Greek physician Aretaeus claimed that the uterus was a sentient being, "an animal within an animal." 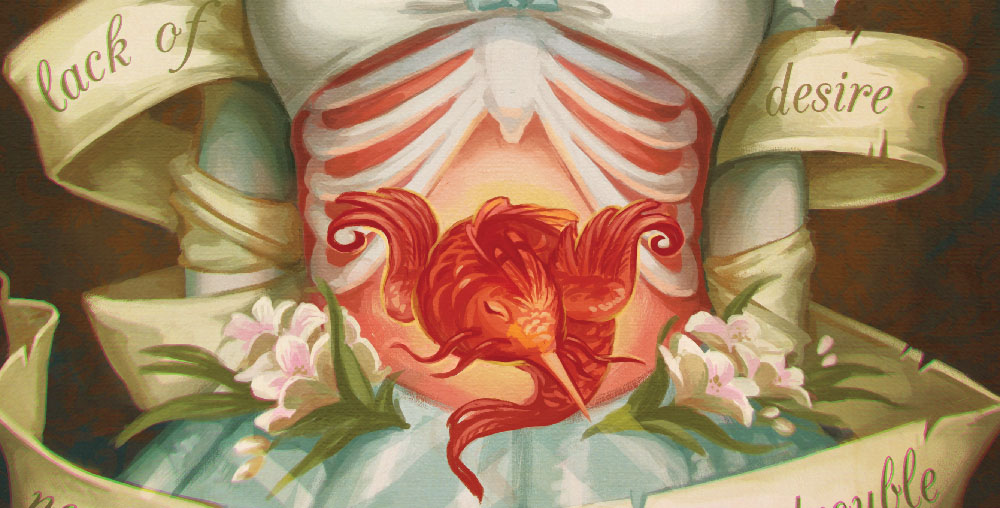 The concept died out around the end of the 19th century, but the idea of women's guts making them crazy persists today.

If you're interested in the bizarre history of hysteria (I didn't even go how it was "treated", because I keep this blog PG-rated) I would highly recommend listening to Sawbones' hysteria episode.

I almost didn't go through with this illustration because I was afraid it was just too weird. 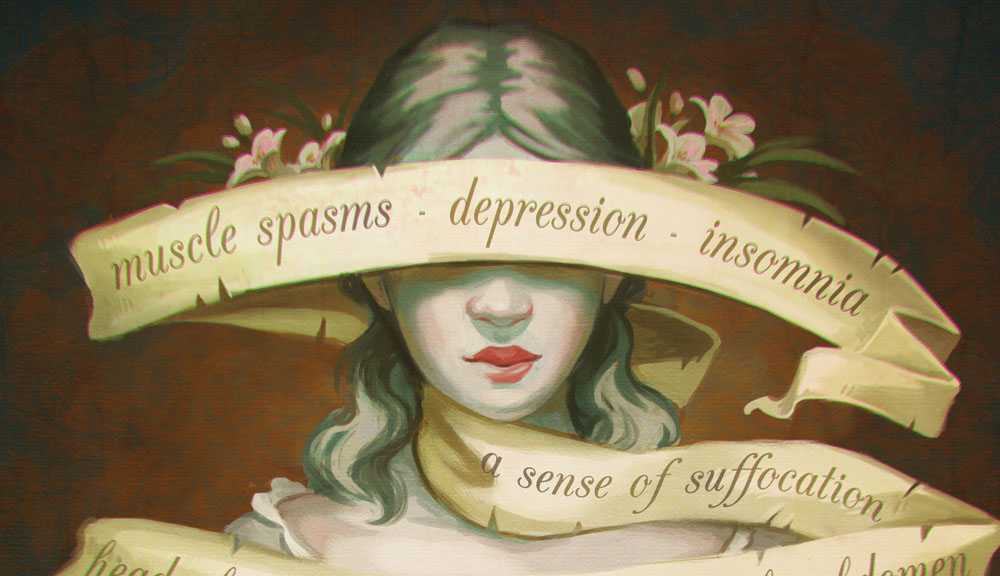 I was working through some really challenging commissions at the time, and I was yearning for something simple and self-indulgent - the artistic equivalent of eating waffles for dinner. A pretty girl on a flat background sounded nice. No perspective here, no thank you.

An important aspect of hysteria is the myriad of symptoms attributed to it. At first I was going to have the symptoms written like a diagram, pointing to various areas of the woman's body. But then I developed the idea of having the symptoms written on a ribbon that was constraining the woman. I thought this was a more visual approach, and I liked that it reminded me of tattoo designs. 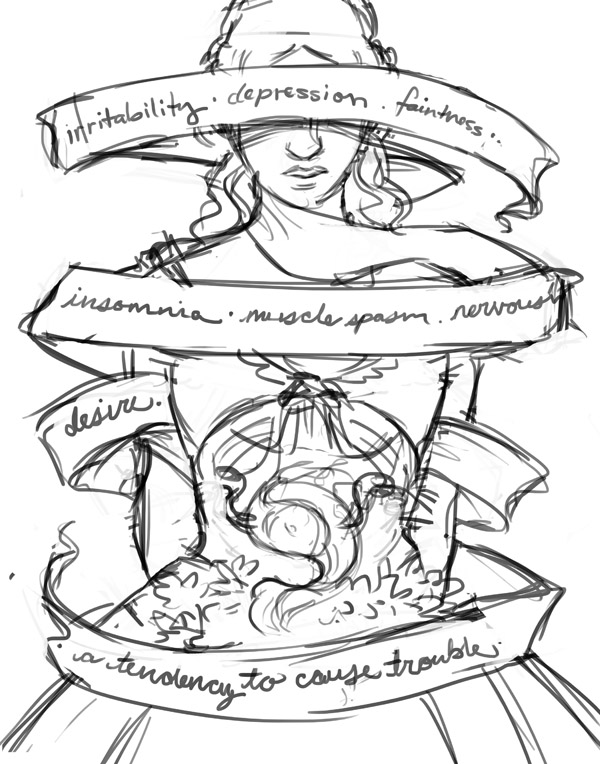 I went through a few different ideas for the "animal within an animal," trying to keep it from looking funny, cute, or like any specific animal in particular. I didn't want people saying, "why does she have a fish in her stomach?" I didn't want it to look silly, but isn't the idea of a sentient uterus creature inherently silly? Argh! So much for giving myself an easy assignment! 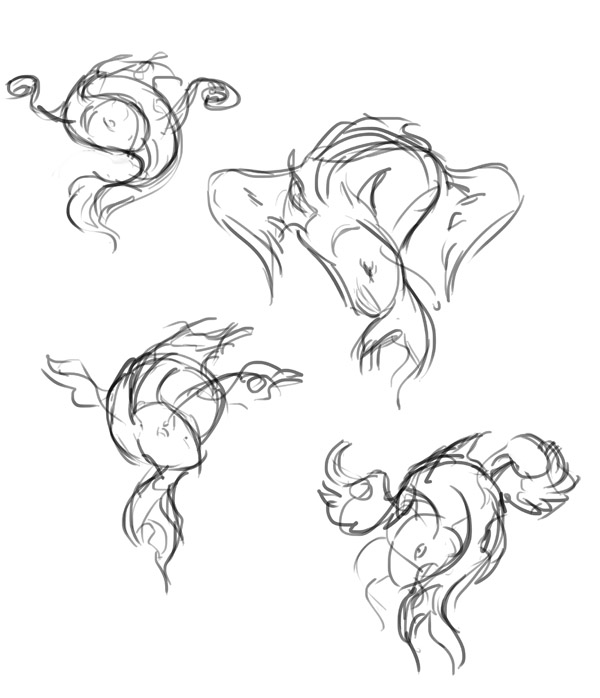 In the end I went with a combination of a bird and a fish. What do you guys think? Is it the best sentient uterus you've ever seen in your life, or have you seen better ones?

The show is closed now, but here are some photos from the opening night on Light Grey Art Lab's page. 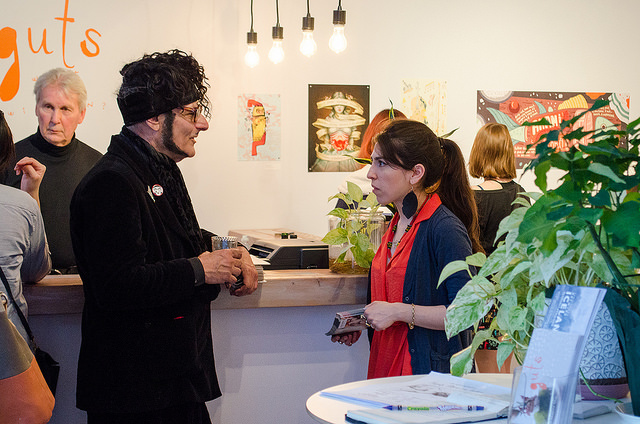