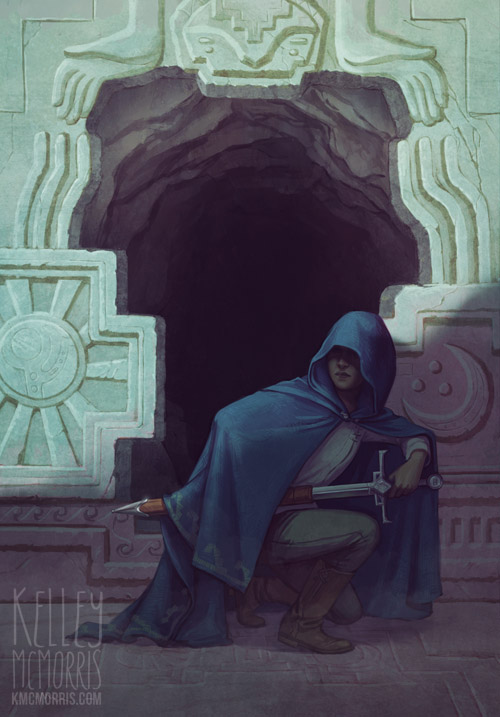 "Guard" is one of those words I never spell correctly on the first try. Also "field."

Anyway, I was super, super excited when I got the email asking if I would be interested in creating a cover for Second Guard. It's a young adult novel about a teenage girl training to be a warrior in a sort of fantasy-Spanish-Incan kingdom. Not only do I love warrior chicks, especially teenage warrior chicks, I also love Meso-American and Andean cultures.

The art director at Disney-Hyperion, Joann Hill, first asked for some sketches with Tali, the main character, standing in front of a carved wall, holding a sword in a strong-but-not-fighting-stance.

I was at my brother-in-law's house at the time, and he happened to have a sword, so I borrowed it and took some photo references.

In the world of Second Guard, society is divided into three guilds: Sun, Moon and Earth. Tali is part of the Sun guild, and this is strongly emphasized throughout the book, so I posed her in front of some sun carvings. I also drew some versions with the castle in the background. 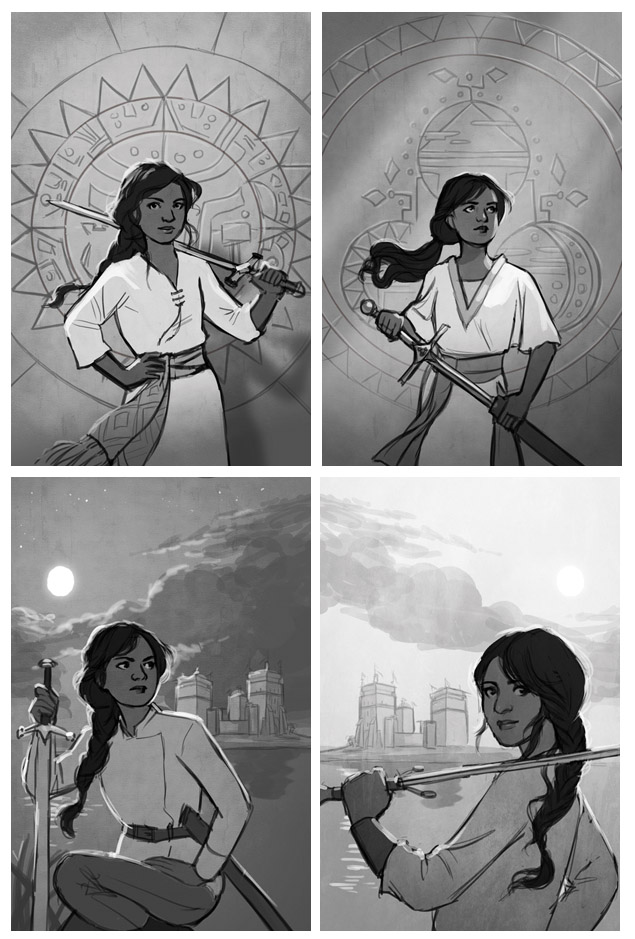 The team decided that they wanted Tali to be crouching against the wall, not just posing and looking pretty. They also wanted a cloak shadowing her face. 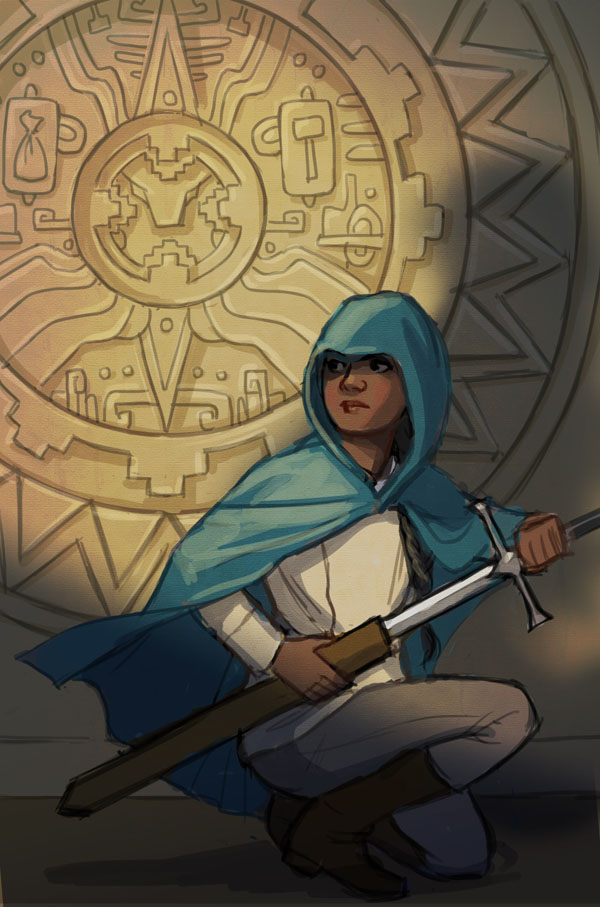 At this point there was a bit of change in direction for the cover. The team wasn't satisfied with the sun carving - it looked too Aztec, not Incan. Joann asked me to redesign the wall with a more Incan aesthetic in mind. She also asked if I could work some symbolism into the designs.

Also, it was decided that they wanted Tali's face to really be covered by the cloak, not just shadowed. They felt that a more androgynous look on the cover would give the book a wider appeal. Additionally, they wanted Tali to look like she was about to spring into action.

So I put on my trusty Frodo cloak (which I wore on opening night of LOTR: The Two Towers, because I'm awesome) and took some more photo references of myself springing into action - surprisingly difficult!

Next I sketched some new ideas for the carvings on the wall, using the mythology from the book and looking at lots of photos of Andean carvings. I sent them with explanations of all the symbols. 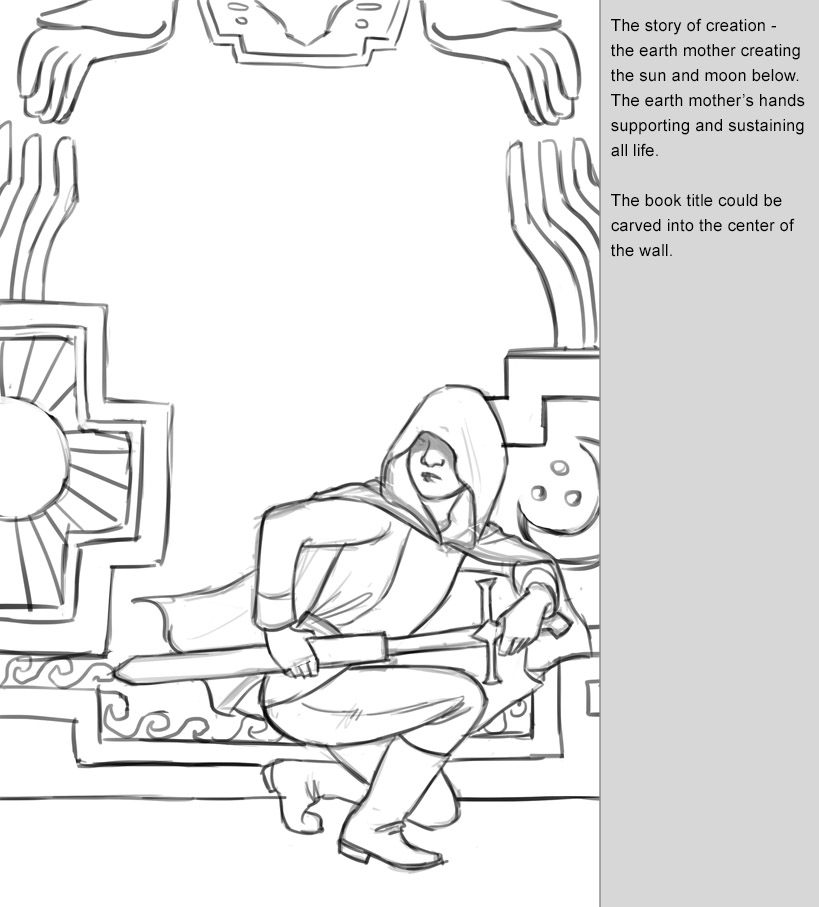 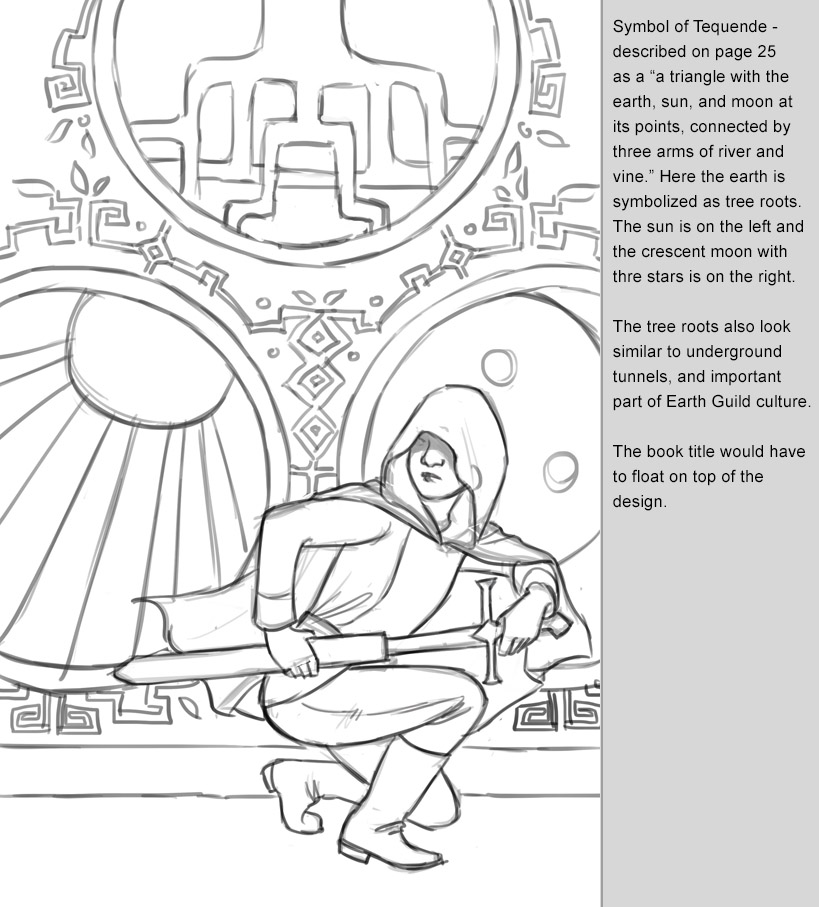 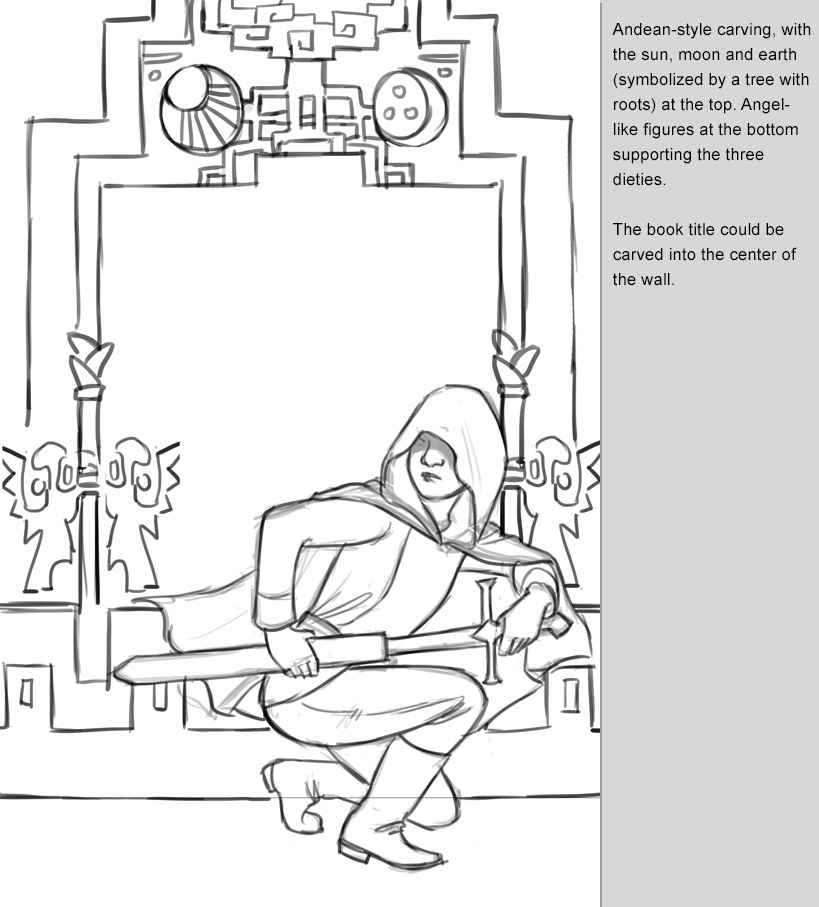 The art director really liked these designs. She had the idea to take the top design and knock out the center of the wall to make a tunnel, since a significant part of the book takes place in underground tunnels. She also mentioned that Tali's cloak looked too short - so back to the photo references I went! This time I used a bedsheet. (Which I wore to opening night of LOTR: Return of the King) 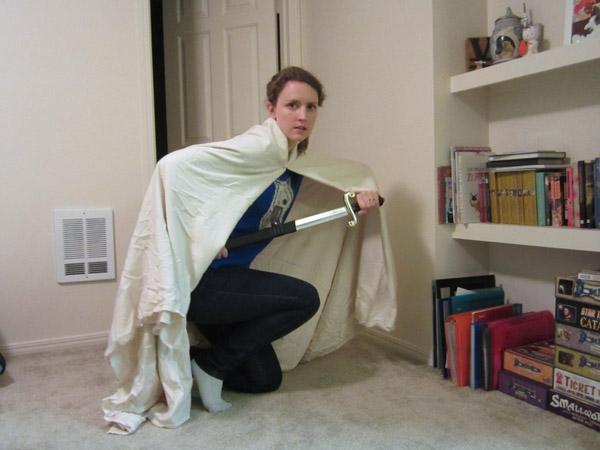 Finally I got the green light to go ahead! Here is the color rough: 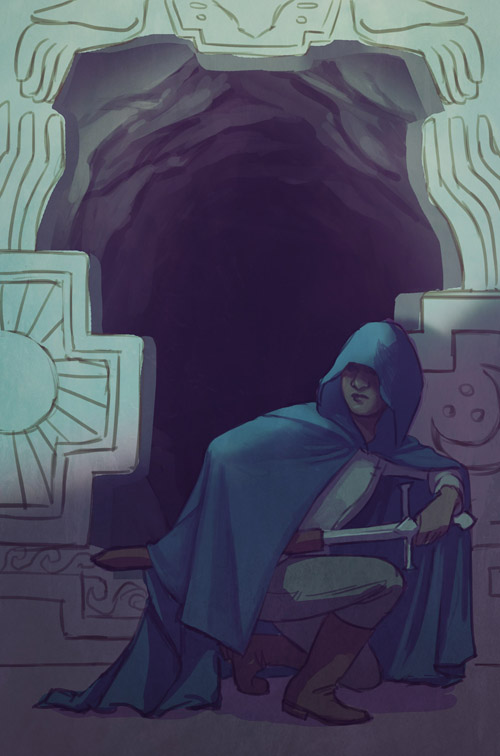 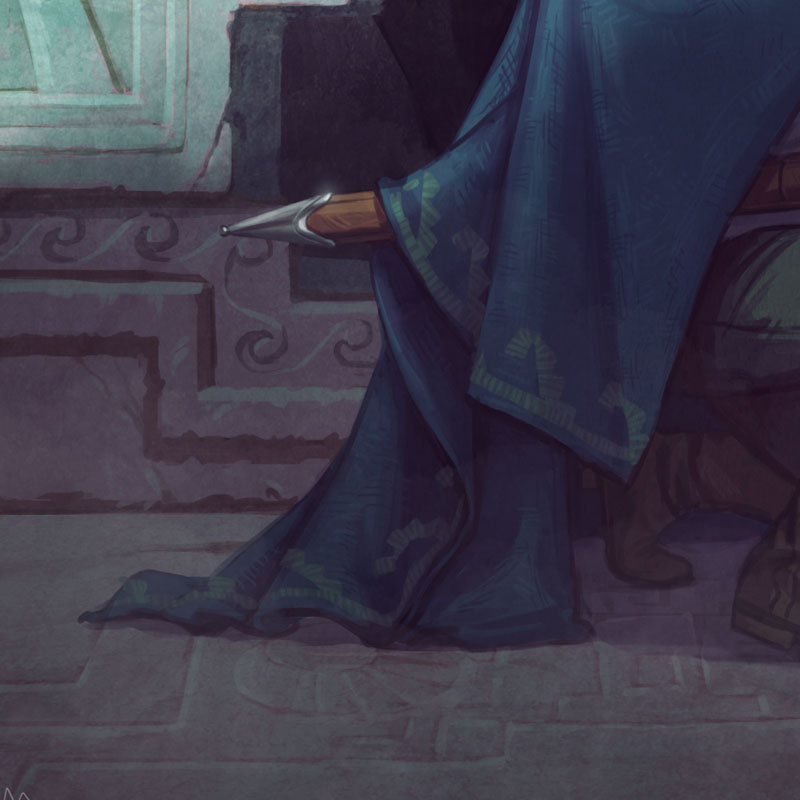 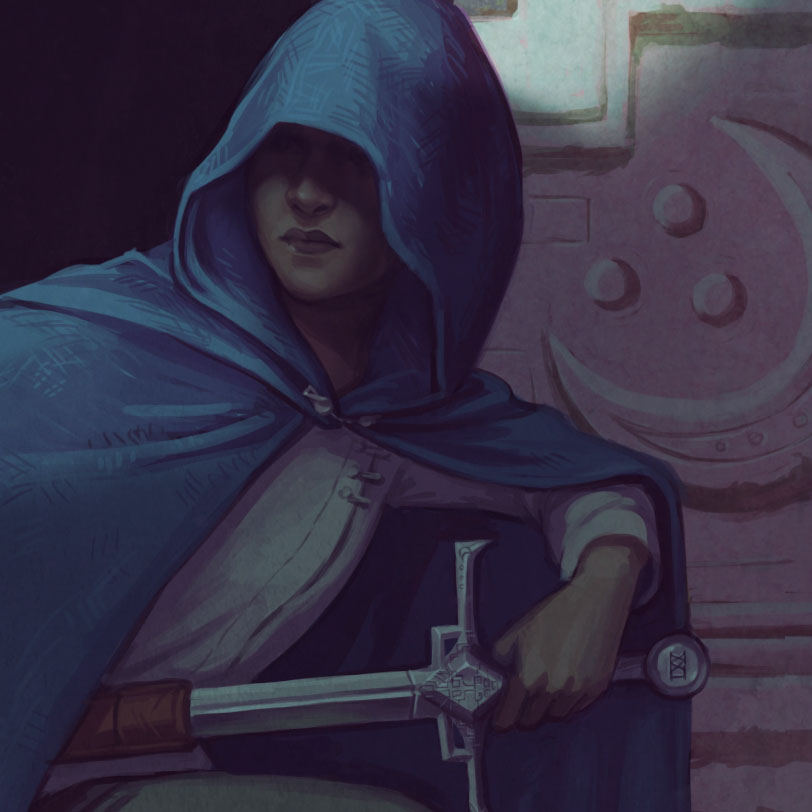 This week the author, J.D. Vaughan, tweeted this photo of an advance copy of the book: 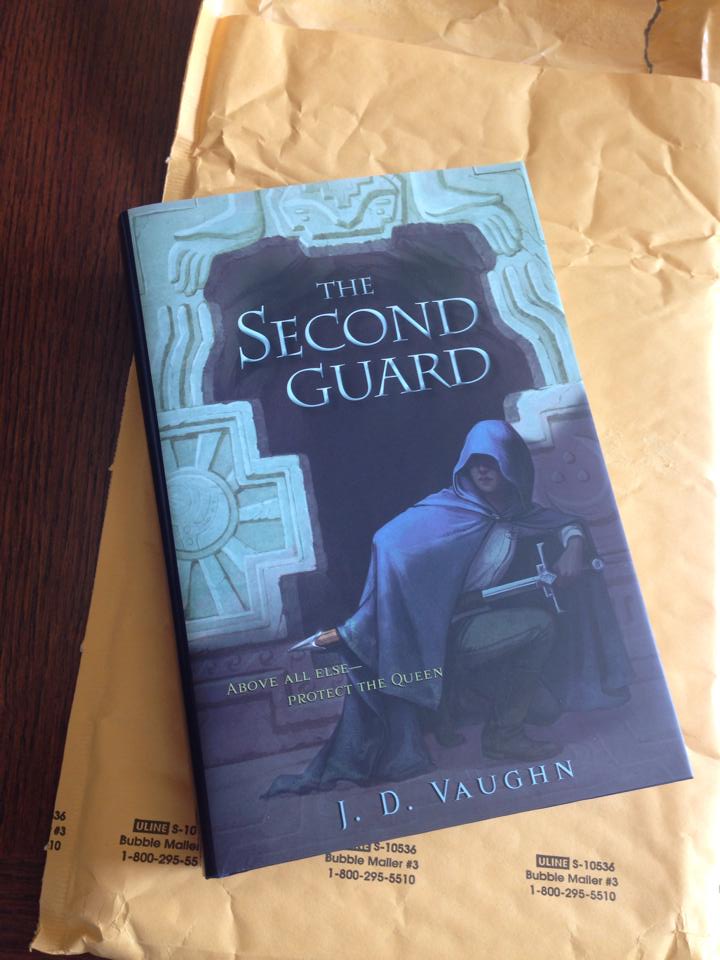 Second Guard will be available on April 14th. I loved reading the manuscript, and I highly recommend it!

And now for something completely different - can you help me with something? I'm curious about who is reading this blog! I've added a poll to the right side of this blog. (You may have to scroll upwards to see it.) Would you take a moment and answer the poll? Thanks a bunch!